Book Review: God is a Gamer

I have heard people say that the books choose us. Sometimes, when books keep popping up in front of me, I have believed this to be true. That is what happened with God is a Gamer. When it kept popping up before me, I kept ignoring it because of my exams and finally I forgot about it. But after my exams, eventually, the book reached me.
The world’s first Bitcoin thriller has a tagline right on the cover; Is Revenge a Crime?
Put simply, the tagline echoes the entire tone of the book crisply.
It begins with Gillian Tan rushing off for a committee meeting with The President. Tan’s is an atom family with a loving wife and a daughter in her twenties. He pecks his wife on her cheek and leaves. On his way, a bomb awaits to decide his fate.
In India, the names of the shortlisted candidates for the post of Governer of RBI, is given to the Prime Minister. Not satisfied, he asks for a revised list of candidates.
Swami is the Head of Retail banking in New York International Bank (NYIB). His mother tells him that their neighbor has lost a huge amount of cash from her account in NYIB. On further inquiry, he gets to know that not only his neighbor, but many others have lost money from their accounts. Due to a phishing scam, the NYIB’s customers cumulatively lost 5 million dollars.
Malvika – The CEO of NYIB not only refuses to take any responsibility about the scandal, but also portrays Swami as the sole reason for all the mishap. She tries her best to keep her hands clean and dry, away from the mess.
Tanya arrives in Goa as a part of an organizing team for an event. She had originally met Varun at Rio a few months back. So, when she sees him again here coincidentally, it comes as a surprise to her. They gel immediately and she spends the night with him. However, he seems to have vanished the very next day.
Indiscape Gaming Corporation’s survival depends mainly upon MAUs – Monthly active users. Aditya Rao who was initially a part of NYIB had handpicked a team of trainees including Swami, Sundeep and Kalpana. Later, Aditya sets up Indiscape and alongwith Sundeep he is committed in making Indiscape succesful. Swami however continues at NYIB. Both Aditya and Sundeep are bent upon running Indiscape righteously and also in an old fashioned manner.
Adrian and Tony are in charge of Gillian Tan’s case.
Josh has been assigned the job of carrying out an ATM heist. 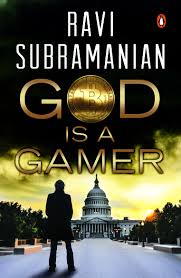 While the readers are taken on a roller coaster ride of multiple characters, a parallel world of cotton trail and bitcoins are introduced to us. Cotton trail is a market place for anything illegal. Be it narcotics, prostitution, drugs or even pedophiles. It had a brilliant mechanism whereby it was difficult to track the buyer or the seller. The payment can be made through bitcoins.
While the story unveils itself, amidst all the mystery and investigation, the romance between Varun and Tanya brings a happy note in the entire story. There are knots after knots that get piled up as multiple deaths and crimes keep happening. Until the end, Ravi Subramaniam keeps his readers restless and intrigued.
Right from the beginning, the story gathers a standard pace. Unlike some stories that require time to interest us, this one has our attention right from the beginning. It is one of the happening books right from the start and that is what kept me hooked to it. This is Ravi Subramanian’s first book I’m reading and it makes me want to read more of his stories.
When you think it is all settled and over, you realize that it has just begun. After having the meal that Ravi Subramanian has set before you, I’m sure you will say that the desert is the yummiest! And it brings us back to the question; Is Revenge a crime?
I found my answer! 🙂
Bottomline – If entertainment, mystery, suspense and twist is what you need, you’ll get it all here. I just loved the book. A true thriller!