Happiness is going on trips

Being a Kochiite, I have never gone to Fort Kochi or Mattanchery as a visitor. I never had the opportunity. But for some time now I have been wanting to go there. Specially after I went to Fort Kochi for a photo-shoot and realized how different that place was from the rest of Kochi.
That day, by 2.30 pm, we – My Sister, my best friend and I – started towards our planned Fort Kochi & Mattanchery trip. I had my Lavy and he had his bike and so it was a pleasant ride from here. With around 3 bridges to pass through (Frankly, I lost count :P), I was mesmerized as always seeing the water body. I was torn between the need to ride and the urge to keep looking at the waters. Man! That is risky!
These were the places we went to during the trip;

The Pardesi/Jewish Synagogue
In about half an hour, we reached Mattanchery and began with the Jewish synagogue. Once we took the tickets, we were led to a room that had illustrations and description about the history of the synagogue. I tried reading some, skipped some and remembered a very few interesting facts. I never knew Kodungallur was known as Cranganore. Sounds really cranky!
The synagogue was built in the 1568 by the Jews. The flooring was laid using 18th-century, hand-painted, porcelain tiles. One of the most fascinating things I found in the description was that, no two tiles are similar. Sure enough, when we scrutinized, though they all looked similar at first, there were minor differences between each tile. Photography was prohibited and so, I couldn’t get a close up image of the tiles. However, Wikipedia did give me an image of the interiors which you can see below. At the center of the synagogue is a brass railed pulpit. But, what caught my eyes were the Belgian glass chandeliers. You can see them all hanging majestically. I wonder how the place looks at night, with all the lights.

The Clock Tower
While entering the Synagogue, you could see an 18th century clock tower which is also an attraction there. In the image below is the clock tower. The entrance to the synagogue is towards the left, next to the lamp shade. 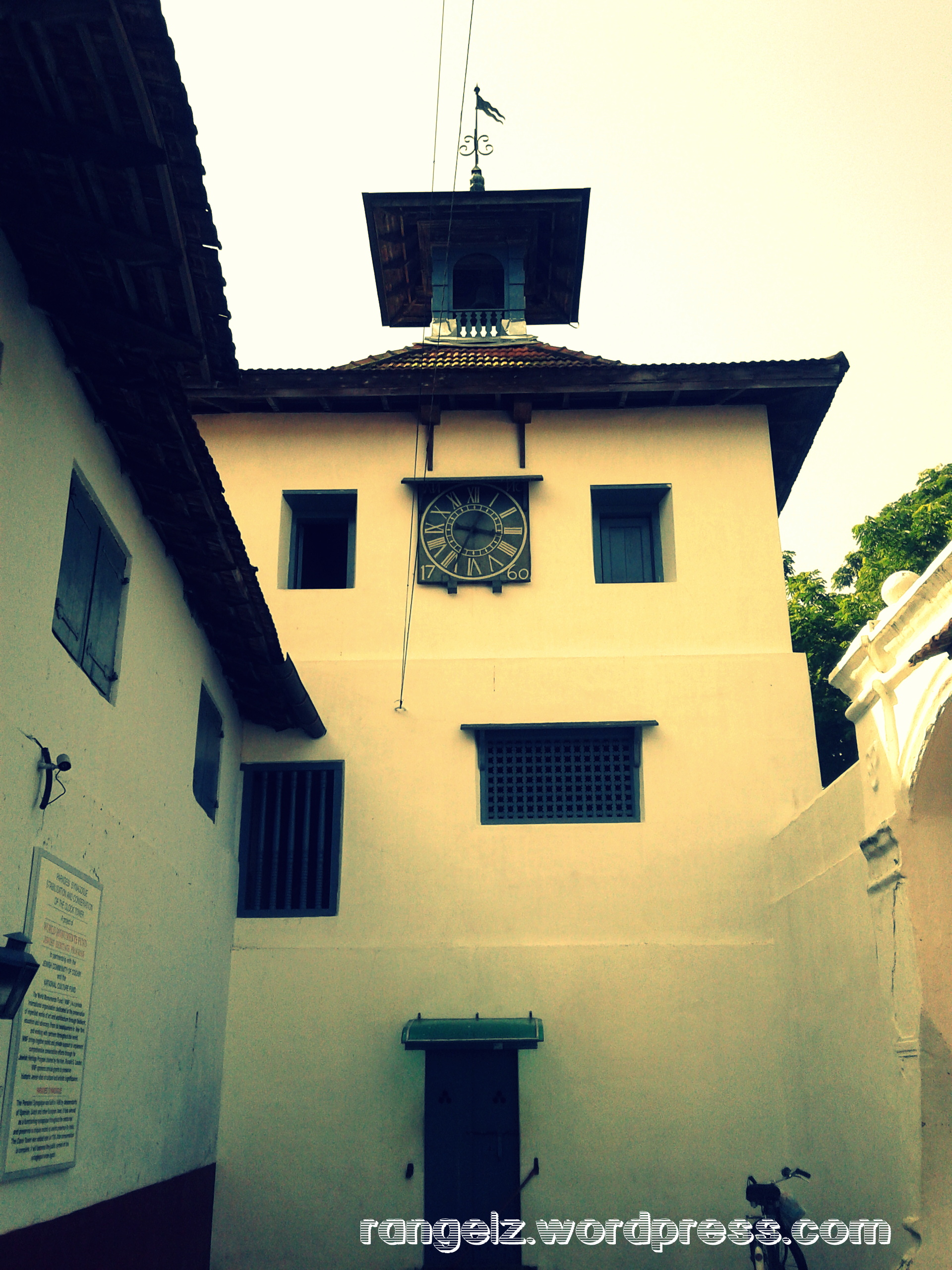 The Streets of Mattanchery
The streets of Mattanchery is filled with antique shops, art galleries, display of black metal jewelry, pashmina & cashmere shawls, a combination of ethnic designs, North Indian and western outfits etc. I was pointing at everything in the vicinity saying variants of ‘wow’s and ‘so beautiful’s.
Some buildings had beautiful structures. I don’t know what they call them, but a lot of intricate handiwork had gone into making them. This is one such thing I found before a shop.

I don’t think it looks as beautiful in the picture as in reality. Those water plants are in itself a beauty. And when they are laid out like this in a miniature well, it enhances the beauty further. I would definitely have one like this built in my mansion some day. 😉 Oh! And look at the artefacts inside the shop. We do have a hanging lamp at home. So, that’s one down. 😛

As I walked down the street, I decided to take some pictures of the shops. Again, this isn’t how it looks. The streets are beautiful and I need a real camera. 🙁 You can see all the clothes, scarves, the jewelry, the ethnic bags etc. All the colors were driving me crazy. 😀


We entered through the left side where they had displayed mannequins with various police uniforms starting from the Travancore Kings’ era until now. I was surprised to see the drastic change. Women police, at one point of time had skirts. Also, they had displayed the different types of caps used.
The central portion of the museum had a multitude of artifacts, some of which were very beautiful and intriguing. Towards the left side of the premises, there were various kinds of swords displayed. They are all reserved for another post.

The World’s biggest Uruli
Uruli is a traditional cookware in Kerala. They are often used mostly for religious ceremonies; in Temples or for Poojas at home. Nowadays, you can see them in various sizes adorning the drawing room of many Malayalis. And why not!? It looks majestic as you can see below.

The picture given above was taken at an antique store in Mattanchery. They claim this to be the world’s largest Uruli that got into the Limca book of records. It looked so aesthetic, filling the entire hall of the shop. I also silently wished that there were turtles in the water. It would be fun watching them. 😛 I love the intricate work on its body. Isn’t she a beauty?
The Dutch Palace
Our last stop in Mattanchery was the Dutch palace. Though it is named so, it was built by the Portuguese in 1555. It was gifted to the then king of Cochin. Later on, the Dutch carried out some extensions and renovations and hence the name Dutch palace. It is built atop a Devi temple.
The palace is built in the traditional Kerala style (naalukettu) and has a courtyard in the middle. They don’t let us see all the parts of the temple which is sad because, there was a particular corridor which looked irresistible. If we stand there, we could see the entire interior portion of the palace which is the specialty of a naalukettu.

I am sure that I have missed out many things, but this is what happens when they don’t let you take pictures.
Fort Kochi
Fort Kochi is where the God’s own country takes a tangy twist. The buildings there have a western finish to them with their posh looking windows, bright and chic paints in different colors, streets named after Westerners whom I really don’t know. My favorite of all is the princess street. I felt that was the most colorful and unique area there. We walked through the street for a while, and then went to the beach.
Once we were done with that, we went back to Mattanchery, munched into some cold Pepsi and hot vada pav from Goli and started back home. I really can’t wait to go there again. We couldn’t cover many places and one day, I will. This is just the beginning. 🙂