I keep telling people to read the Harry Potter books because there are a lot of Fantastico lessons in them. You get the essence of it only if you read. The emotions and reasons behind certain things are clearly given in the books. By lessons I mean deep lessons that could come handy in life. This is where Harry Potter series stand apart from the regular children’s books. It is meant for all. For all those who believe in magic:
• Love Surpasses Power – Voldemort wanted to be the most powerful wizard of all times. He believed that power was everything and wished to rule the world until he got in the way of a mother and son. When Lily Potter sacrificed herself to protect her son, that kind of love left a mark. Not the scar. But an invisible protection whereby it was difficult for Voldemort to kill Harry initially. 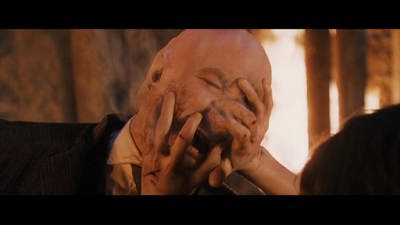 Voldemort was incapable of love and he believed that love was for the weak. It was proved otherwise.
Takeaway from the book: In current scenario, we see wars, rapes and murders. There is the hunger for power. If there was only love, will any of these problems exist?
• Money can’t always buy happiness – True happiness is where love is. When Harry realised that he was a wizard, he had lots of money in his vault in Gringotts wizarding bank. But he found true happiness when he met Ron & Hermoine, received presents from Molly, lived in the Burrow and become one among the Weasleys. They were an average family struggling to make their ends meet; the children using second hand robes and books. But they were rich with respect to happiness and love.
A loving boy informed his mother that his close friend never got presents. Since she makes jumpers for her children, every Christmas, he asks her to make one more for his friend.
Takeaway: I don’t completely say that money can’t buy happiness, but happiness isn’t restricted to money. Spend some time with your loved ones, find happiness in little things. You’ll know what I mean.
• Believe in yourself – Harry pours a drop of Liquid luck in Ron’s drink. He sees it and gobbles it down. The matches that were awful for Ron until then, turns out to be fantastic. But towards the end, Ron realizes that Harry had just pretended to add the potion. It was Ron’s confidence and capabilities that won them the cup.

Takeaway: Think that you have a liquid luck in a vial and pretend to drink it. Believe that it will be your lucky day. In the end, you’ll know that you are your own luck.
•Teamwork – The danger was apparent and the faculties in school had changed. The students weren’t being taught to defend themselves because of the Devil in Pink – Umbridge. To learn to defend themselves, a team is formed. They begin to learn spells, curses & jinxes from Harry and work as a team to conduct the sessions. By the time, the team is caught, they know how to find and evidently the knowledge comes in handy during the battle of Hogwarts. Takeaway: If you cannot achieve something alone, form a team and work together. There is no other propelling force like teamwork and unity. 🙂
• All doors do not close at once, there is always a door that opens unexpectedly – Snape is about to die and he asks Harry to take his memories in a vial. None of us saw what was coming, did we?
Takeaway: Whenever you are stuck in a problem and if you have the best interests at heart, you will find a way out. Just think hard enough or believe that you will find a way and it will happen. As Paulo Coelho put it, the universe conspires for you to achieve it.
• Never under-estimate a child based on his inability to study – Neville Longbottom is the best example. He kept forgetting things, he was clumsy, timid and a slow learner. He was intimidated by some of the teachers and it made things worse for him. But, he had to be the one to kill Nagini.
Takeaway: Be a friend to children first. Let them feel like confiding in you. Then gradually, build up their confidence. If they are unable to study, it will have a reason behind it. Not every child is the same. You can’t expect everyone to top the class! Stop intimidating them and you will be astounded by what they are capable of.

• Depression, if ignored, sucks the life out of a person – J K Rowling said that Dementors symbolize depression. They suck the happiness out of you. We are told in many parts that the worst part about Dementors is their kiss. Once they administer the kiss, the victim becomes soulless; a mere vegetable. Takeaway: Fight depression whether it happens to you or to a loved one. They will forget to be happy. Don’t let them. Do what is necessary. You do not want them killing themselves or worse, existing without happiness. Understand that it isn’t a mental illness, but definitely an illness that requires care & medication.
• With good friends around, problems in life will be easier to handle – The book screams friendship! Ron is the compassionate boy who gave Harry a family. Hermione was the most intelligent witch who had an answer for every question. Their problem was the Horcruxes and they would never have found them all if not for the trio.
There was another group. One was bitten by a werewolf and he transformed into one every full moon. Inorder to make this easier for him, his friends became animagi & transformed themselves into animals too. This was supposed to be very difficult for kids their age. Friendship, huh?
Takeaway: It is pretty clear isn’t it? The books have emphasized the value of friendship over & over again.
• If you have to change your true nature to be accepted, you don’t need that kind of acceptance –
Luna Lovegood was strange. She had her beliefs, she was called names, kids hid her stuff and played pranks on her. Most of the people never understood what she said, yet Harry respected her. Many of the valuable help came from the most unlikeliest of places, her being one. Takeaway: If you know someone quirky, let them be. If you are weird, don’t try to fit in. Changing yourself for others will make you unreal, unlike you. After a while, you will feel frustrated. Be yourself & as long as you don’t hurt anyone, you are good. People who love you, will accept you as you are.
Harry Potter! You listen to me right now! Don’t you remember what Cho said about Rowena Ravenclaw’s diadem? There’s not a person alive who’s seen it. It’s obvious isn’t it? You have to talk to someone whose dead.
• No creature is inferior – Elves were treated as slaves. Harry changed it. He treated Dobby as an equal and he surely proved by his deeds that he wasn’t inferior. In many circumstances, what wizards couldn’t do, Dobby did.

Takeaway – I know a lot of people who treat other men or children with contempt, as though they are inferior. People watch quiz shows and belittle the contestants if they don’t know an easy answer. People belittle coolies, maids, construction workers and waiters. You came from nothing and will eventually die. What makes you greater than any of them, ultimately? Think over it.
If you want to know what a man’s like, take a good look at how he treats his inferiors, not his equals.” –Sirius Black
This blog post is inspired by the blogging marathon hosted on IndiBlogger for the launch of the #Fantastico Zica from Tata Motors. You can apply for a test drive of the hatchback Zica today.

A Bucket-list For a Better Lifestyle in 2019