December 1, 2016 – Amma & I had gone to broadway for some shopping. Since the weather was chilly and it was drizzling, I didn’t take my two-wheeler. We booked an Uber, got down in front of Hotel Sealord and began to walk. It must have been around 7 pm. Marine Drive area was buzzing with life, twinkling with lights and every light was reflected a million times in the raindrops falling silently.
We saw the Mings Dumpling House and decided to go see what Dumplings were since I had no idea until then. Turns out, Dumplings are English for Momos (If there are people who don’t know). So, we had some steamy Momos at quite reasonable rates and then continued our walk.
As we cut across the alley towards Broadway, the black & bronze colored street lamps and the drenched, shiny roads, the streets lined with shops displaying stars, baubles and shimmering what-nots kept reminding me that December had indeed begun!
Ah speaking of Decembers in Kochi! It is one month that announces its arrival in advance. December means winter which is a heavenly time here. December means Christmas. December means streets lined with colorful lights, umpteen varieties of stars, Santa Clauses of different shapes and sizes all around, Christmas trees, twinkling, bejeweled city full of life! The signs of  these are seen from mid-November.
Rest of the city is halfway through the preparations. But broadway! Oh my! Every shop we passed was screaming ‘Christmas’. Stars, streamers, baubles, trees, Santa, and so on. And it was cold after a long time; the nice sort of cold where you just want to close your eyes, breathe in the air and the world comes to a standstill. The one that holds you back from going home.
We hopped from shop to shop, took our time as there was nobody to stop us. I remember how when I was a child, Amma used to take me with her whenever she went shopping. The two of us have been constant companions. She had her Scooty and I’d tag along, hugging her to make sure that I don’t fall off. I was quite tiny, you see! I was supposed to keep talking to her so that I didn’t doze off. Now, I take her around in my Powerpuff (Lavender Pleasure). We enjoy it as much. December is her favorite time of the year too. We love shopping, exploring places, food and looking at all the new arrivals in the market. 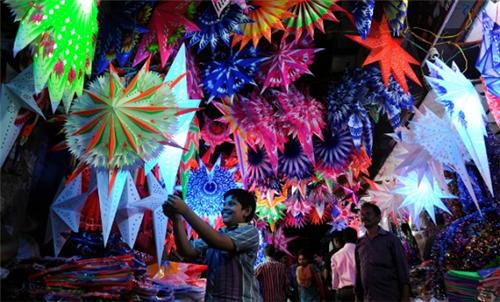 We enjoyed a lot yesterday. December started off well – The beginning of another end. After our shopping, we got back home and she kept telling me how wonderful it was and how we missed the brat, my sister. I kept thinking about Christmas and opened my blog for another surprise – The Snow! You can see it right? Every December, it begins to snow in my blog. Being a fan of all sorts of Snows – Jon Snow, white colored Snow & the Snow flake pattern – this adds to my December love!
100 Happy Days – Day 91
As I sign off, linking my first Christmas post in this blog, I wrote 6 years back: Smile – The Joy of Christmas. It has been six years, this blog. Can you believe it?
Christmas posts from 2015:
The Christmas Spirit
Found My Christmas Lights
You see? December isn’t just a month. It is a feeling <3.