Ajayan, a visually challenged 17-year-old from Kerala, gradually began to lose his hearing ability too. During the next 3 years, his hearing loss went from mild to profound to severe making him hearing disabled). Audio-visually challenged, his mother had no way to communicate with him. All she could do was to write on his hand so would understand what she was trying to communicate. His parents’, worst fears were about him crossing the road. While every parent’s sole dream is to watch their child be independent and accomplishing. Ajayan, at the age of 30 was not only dependent but also isolated from the world. And so it went on for about 20 years until he got his hearing ability back. Yes! He got his hearing ability back and so can the 360 million people worldwide having hearing disabilities. Only if they know where to get the right help from, read on to know more.

Causes and Some Statistics About Hearing Loss 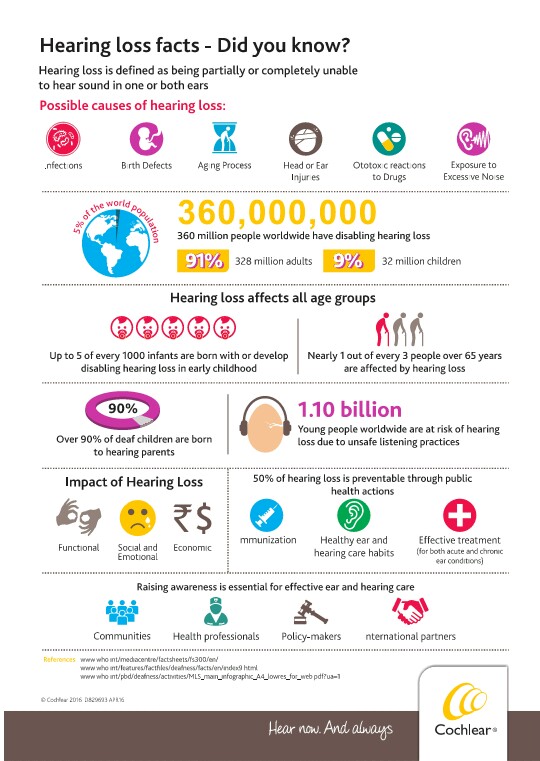 How to Prevent Hearing Disability

1. Mandatory Hearing Tests for Newborns – The first step to tackling hearing disability is to diagnose it. Making hearing tests mandatory for newborn babies in every hospital would lead to early detection of the disability resulting in an immediate solution. Earlier, always the better.

2. School Based Hearing Tests – 1.1 billion young people worldwide are at a risk of hearing loss due to unsafe listening practices. One could lose hearing ability at any point of time in his life. Hence, conducting hearing screening camps at schools could help detect and prevent hearing loss at an early stage.

3. Screening of over 50-year-olds – With age, hearing abilities tend to reduce and so taking hearing tests regularly after 50 years of age, will help identify ear related issues and take measures to prevent or worsen the condition.

4. Providing Effective Treatments – How often do we visit an ENT for Ear related problems unless it is something very severe? If something is amiss, no matter how minor it is, taking treatments could avoid something disastrous.

Cochlear™ Implants – Surgically implanted into the Cochlea, these implants revive the audibility of a person suffering from 100% hearing loss, provided the issue is with the Cochlea. Implants are used when the best hearing aids do not help.

Ajayan’s parents sought to find a remedy for his hearing disability and got to know about Cochlear™ Implants. They couldn’t afford the cost of the implants and so gave up. But with time, Government’s aid and contribution from across the globe gave them hope and the implant was done.

Last week, I had the good fortune to attend the Cochlear™ India Blogger’s Meet held in Kochi. The meet was presided over by Cochlear’s Global hearing Ambassador and the Cricket Legend, Brett Lee and ENT Surgeon Dr. George Kuruvilla. Brett Lee briefed us about how most of us pay less attention to Ear related issues and how it should be taken more seriously. According to him, we visit the ophthalmologist or the dermatologist the moment we find eye or skin conditions. But we don’t give the same importance to ear conditions. An implant could not only revive the hearing ability but also improve one’s confidence.

Consequences if Not Addressed Early

As per Dr. George Kuruvilla, the Cochlear™ implants are highly effective for children below 3-3.5 years. This is because, beyond this age, the language development which is already delayed gets delayed further. This leads to academic underachievement and social isolation. It is common knowledge that children who lag behind lack confidence and feel inferior to their peers.

Further, if the implant is done for an older person who has never heard before, he wouldn’t be able to understand the language as it will be the first time he will be listening to the human talk. Since his ear related organs have taken a back seat ever since birth, it will take immense effort and lots of time to train him with language and communication. Not that it is impossible. A person whose hand was paralyzed for many years won’t be able to use it one fine day when he is cured. Same is the case here. This is why early detection and solution is recommended.

Ajayan has been undergoing speech therapy after the surgery. Had Cochlear™ implant been available to him earlier, right after he lost his hearing, it would have improved Ajayan’s life drastically and the therapy wouldn’t have been necessary in the least.

During the meet, we were fortunate to meet Ajayan and his mother. We spoke to him and he told us how he felt about being able to hear again. He regained his hearing ability after 20 years and initially, it took him a while to get adjusted to the sudden presence of sound. It took him a while to understand the things he heard. But now, he can hear all the crows that sit atop the roof of his house and the chirping birds. “Sometimes, it is annoying when the dogs keep barking”, he said. But all the same, he seemed very happy about it. His mother was happier. She didn’t have to write on his hands anymore to communicate with him. She was very much relieved that he could take care of himself now that he could hear. They d0n’t have to be on his guard all the time.

Cochlear™ Implants – The What’s and How’s

Cochlear™ implants consist of two parts – the internal implant and the sound processor. The former is surgically implanted behind the ear. The processor is its outer counterpart that captures sound from the surroundings and transmits it to the implant.

The cost of a basic Cochlear™ implant is close to Rs. 8 lakhs. The latest model Kanso costs Rs. 13 lakhs.  After the Cochlear™ implant, they perform as good as human ears such that, they help you tune out unimportant sounds and focus on the sounds you want to hear better. To prevent the eyes from prying at the sound processor, they have been made in 8 different colors to suit hair colors worldwide. The processors can be camouflaged with hair, thereby avoiding uncomfortable stares.

Hearing loss must not continue to be a silent epidemic. We have a solution. We have prevention and detection mechanisms. The only thing left to do is to implement the prevention mechanism and solution effectively, spread awareness and make them accessible to common people easily and in an affordable manner.